Urania (Ancient Greek: Οὐρανία; meaning “heavenly” or “of heaven”), also spelt Ourania, was, in Greek mythology, the muse of astronomy and a daughter of Zeus by Mnemosyne and also a great granddaughter of Uranus. Some accounts list her as the mother of the musician Linus by Apollo, and Hymenaeus also is said to have been a son of Urania. She is often associated with Universal Love and the Holy Spirit. Sometimes identified as the eldest of the divine sisters, Urania inherited Zeus’ majesty and power and the beauty and grace of her mother Mnemosyne. 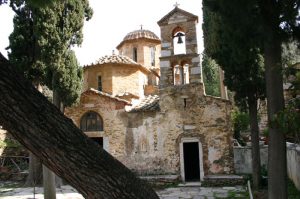 A Pilgrimage to Greece